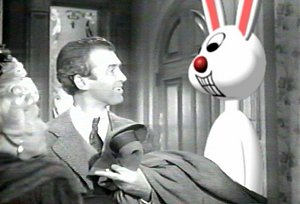 In this hilarious mockumentary, two misguided digital effects gurus "improve" the classic Jimmy Stewart film Harvey, in which Stewart befriends an invisible rabbit, by adding a computer-generated rabbit to every scene. Digital Harvey chronicles what happens when special effects and stupidity collide.

The inspiration for my current short film, Digital Harvey, was born of my frustration with movies that are big on special effects but short on story. In general, I aim to make both entertaining and informative films--simultaneously, if possible.