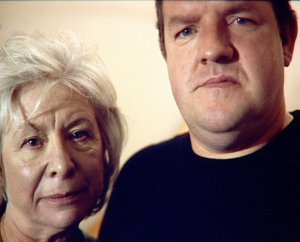 "Engaged" is a black comic fable about love and grief and how the two things often go hand in hand. Eileen and her 40 year old son Mick, run a tatty hotel in West London. Naturally inquisitive, they are intrigued when an educated young woman, with apparently no luggage but a plastic bag, rents a room overlooking the river. The woman is polite but distant; explaining that she is recovering from an accident. However, the truth is much darker; as her continuous phone calls eventually reveal. Who is the lover she continually calls and why does he never answer? What is the significance of the block of flats opposite and the wedding dress in the plastic bag? Why are there bloody bandages blocking the lavatory? Mick is as keen as we are to find the answers.....

Born in 1950 in Oxford, Deacon has been a successful actor for over 20 years. He started writing after a prolonged period of illness, initially writing episodes of The Bill, Heartbeat, and Lovejoy. His latest work, Blind Ambition is currently filming in Australia and the UK. Eric's next directorial project is the $3 million romantic comedy feature, Dizzy Heights, produced by Joy Mellins & Sean Blowers together with American Producer Steven Bakalar.

"Engaged" appears as a deceptively simple film, classically shot and framed, elegantly lit and paced. Yet for all that it has a dark underbelly that (I hope) begins to undermine our first assumptions. When pushed, I describe it as a dark, comic, fable with a sting in the tail - but that's just my take on it. One of the main challenges of shooting a film like Engaged is that the story demands a cool, observed, feel, perhaps more "European" than English. To achieve this I used re-occurring tracking and crane shots to either reveal, or turn away from, the horror lurking beneath the ordinary surface of the narrative.