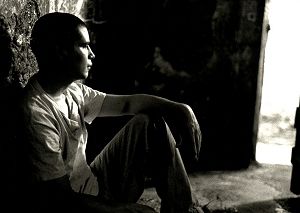 This is the story of Adrian, a young gang member who is deported to his native El Salvador after taking part in a shooting on the streets of New York City. He has not been home since he was four years old, and his readjustment to his native country is fraught with difficulty. After spending a short time in prison, Adrian is reunited with his aunt, a survivor of a brutal massacre during the twelve year civil war. He also meets other deported gang members who share his confusion over their dispossessed state. Adrian must make a choice between the stable, hopeful life with his aunt, or Ia vida Ioca - the crazy life he shares with the other gang members. "Homeland" is a story of hope, redemption, and the desire to belong.

Doug Scott has written and directed nearly a dozen short films and videos. Doug grew up in Southern California and received his BA from UCLA in 1991. He has been living in New York for the last six years and received his MFA from New York University this past May with Homeland as his graduate thesis project. Doug first became interested in El Salvador when he traveled there in 1991 to shoot background footage for his undergraduate thesis project. Doug has worked on film projects in Israel, Central America, Mexico, and all over the United States. His most recent work is as an assitant editor for a feature production company producing a four part PBS documentary on the history of education in America.