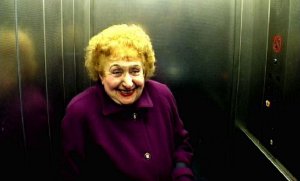 When filmmaker, Marc Isaacs, decided to make a documentary about a lift in a London tower block he had no idea how the residents would react and what they would reveal of their lives. He simply set himself up in the lift with his camera and waited for the right moment to ask questions. The result is both humorous and moving. The whole of British society is captured in this microcosm and the simplest of approaches becomes a parable of multiculturalism.

Born a stones throw away from the location of his first film, Lift, in the east-end of London, thirty-four year old, Marc Isaacs began working on documentary films as an Assistant Producer in 1995. He then assisted Pavel Pawlikowski on Twockers and the award winning Last Resort. After completing Lift in 2001, Marc directed two further documentaries for the BBC about the sub-culture of shoplifting, both of which were nominated for a BAFTA Craft Award in the UK. His documentary film Travellers for Channel 4 was then followed by Calais: The Last Border, which offers an original view of England from across the Channel. Marc is currently making a documentary over two years about children in a remote UK village.