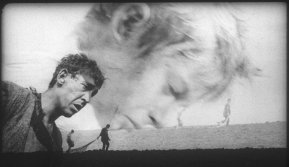 Here Am I is set sometime in the 19th century. A horseman rides through the burning ruins of a village that he has just destroyed in search of a sacred text - a text his banished clan was forbidden to see because they were told they could not bear the purity of its meaning. From the devastation emerges a ten-year-old boy and Mute giant. Fearing the horseman, both survivors head for the river for safety. During this perilous journey, the boy not only has to deal with his companion's bizarre behavior but also the truth that he is the guardian of the life-altering sacred text. "It's unusual for a film to have two directors, it is even more unusual to have a first feature film that is so remarkable mature. With its visual austerity and thematic connections to nature, loss of innocence and spirituality, Here am I is a film with sensibilities reminiscent of Andrei Tarkovsky's debut film, Ivan's Chidhood. Written and shot during a 20-month stay in Bulgaria, Here Am I features performances from two of that country's finest actors, Ivailo Christov and Josef Sergichiev. The film is strikingly photographed in black and white and edited in a beautifully elliptical manner. Concise, compelling and soulful, Here Am I is an astonishing debut film," - Toronto International Film Festival.

Co-Writers, Directors, Producers, and Editors Joshua Dorsey was born in Montreal, Canada in1968. After finishing a degree in Philosophy and Visual Arts at Harvard University, and building on a life-long interest in painting, Joshua shot his first film, "A City of Tongues" (60 min. drama), in Montreal in 1989. Later that year he went to New York City to pursue graduate studies in film. Douglas Naimer was born in Montreal in 1962.Before film school, he did a degree in philosophy, traveled extensively in Asia and Europe, and studied karate in Japan for two years. Joshua and Douglas met at Columbia University's Graduate Film School in New York City where they began their collaboration co-writing an epic dramatic script set in the shtetls of 1830's Russia. Here am I, which they co-wrote, produced and directed during a twenty month stay in Sofia, Bulgaria, is their first dramatic feature. Mr. Naimer and Mr. Dorsey both now live in Montreal.