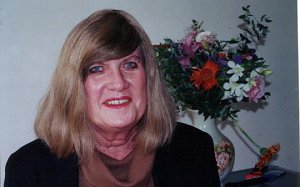 After 57 years of living as a male, Patrick, recovering from a bout of cancer, realised that it was time to face up to all of the fears associated with becoming her true self, Patricia. Years of living a daytime existence as a schoolteacher in a small country town in Victoria, Australia while hiding a desire to be the woman he had always felt he was could at last be ended. Desperation, and awareness of his mortality, drove Patricia to the point of transition or suicide. She could no longer exist as a man. The dream, no the belief, of a lifetime was about to become reality. Better Late than Never shows the confusion through which a Transgendered person must constantly wade in a body which so clearly is a mismatch for its brain.

Dee's career, or rather Duncan's career, started with an old wind-up Bolex making the documentary "FITZROY" in 1977 on a climbing expedition to Patagonia. Since then Dee has directed a variety of films (documentaries and features) of all sizes and budgets in many parts of the globe (Africa, the Americas, Australia and South East Asia). She has won many awards for her documentaries (SOLO ASCENT , THE SILENT HUNTER). A parent of 2, Dee is now living in Melbourne.