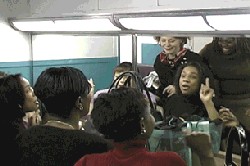 For hundreds of commuters it is just a routine trip form the quiet of Staten Island to the frenzy of Manhattan. But not for all. Every morning a fascinating group of women spends those 30 minutes gathered around the mirrors in the Powder Room of the Staten Island Ferry. As they put on their make-up they transform themselves form housewives to business women. Juggling multiple worlds these women have hilarious and serious insights beyond race and class stereotypes.

Nominated for an Academy Award for her film FERRY TALES which turns the unlikely setting of the Staten Island Ferry women's bathroom into a celebration of sisterhood, Katja Esson's recent film SKYDANCER is a provocative look at Indian life in the 21 Century. Her previous credits include VERTICAL TRAVELER which explores the pioneering spirit of New York City through the metaphoric story of the city's unique relationship with elevators; HOLE IN THE SKY, is a portrait of New York, five years after 9/11; LATCHING ON about the politics of breastfeeding in America; HOOKER, HARLOT, WHORE about the history of prostitution in Europe. Esson's films have been shown at film festivals around the world and broadcast on HBO, PBS and ARTE among others. Esson lives in Brooklyn, New York and shares her time between Germany and the United States.

The director and two producers will be available for Q&A after the screening.