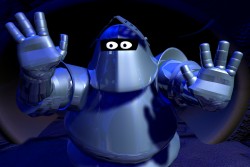 Roland is a big, strong, stubborn, knight. Accustomed to getting his way, Roland finds himself up against an invisible obstacle beyond his experience, ability, and physical prowess to overcome. His brawn having failed him, Roland falls back on his brains to save the day. Believing that he has outsmarted his opponent, Roland succumbs to the temptation of not being able to leave well enough alone. Roland's Trouble is an animated comedy using Three Dimensional Computer Generated Imagery to bring the character to life.

Watching Ray Harryhausen's Jason and the Argonaughts with his father, four year old Chuck Grieb asked how the skeletons "came alive". His father's answer, "They got skinny actors" led the boy to a quest for the truth and a life long love for film and animation. Chuck has worked for Disney, SimEx Digital Studios, Film Roman, as well as various other animation studios. Currently Chuck teaches animation at Cal State University Fullerton.