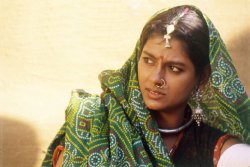 A rural low-caste woman, working for Rajasthan government's woman's development program called "Saathin" is gang raped by upper caste men in her village when she speaks up against the prevalent custom of child marriages. Instead of hanging her head in shame, as she was expected to do, she decides to knock the doors of justice. Her real rape begins when she is made to run from pillar to post in a judicial system corrupted by sexism, chauvinism, feudalism and political opportunism.Caught in the middle of a storm created by the international media, she is made a pawn in the political chess game between the ruling party's Central government and the opposition party's State government, as she is put on a pedestal by one party, and thrown stones at, by the other.Against all odds, she maintains her dignity as a woman and from a rape victim becomes a rape activist. It is a shocking true story, set amidst the picturesque sand dunes of colorful contemporary Rajasthan.

Jagmohan has made 4 feature films in his native India and 19 Television films in the US in English. His film KAMLA was also based on a true story and was an award winning controversial film in India. He has a Ph.D, M.B.A and M.A.(advertising) from Michigan and a Bachelors degree in Electrical Engineering from Bombay.