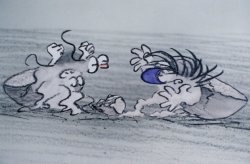 A very condenced expression dealling with the relationship between man and woman. An accidental collision of a man and a woman sparks on an amusing rolling and still jauntier jostle.

Director Anthasnas Janauskas will be available for Q&A after the screening.