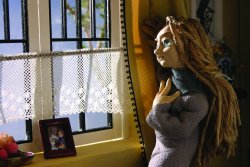 In a lonely house on a hill, a sad young woman sits, allowing a steady succession of empty days and nights to pass her by, until an unlikely disturbance forces her to begin her life anew. Corezon en Fuego, or "heart on fire," is a haunting stop-motion film exploring the positive changes that unfortunate events can bring.