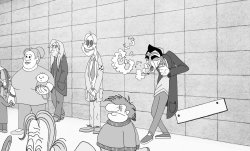 A crowded subway station full of ordinary passengers waiting for the train. And a dog. The dog is engrossed in a game of patience and doesn't wish to be disturbed. All of a sudden, a long cuboid pushes its way through the tiled station wall shoving the dog and his mistress onto the tracks! An underground train speeds into the station, blood spurts up.

The station manager's attempts to prevent the accident are in vain. Two more cuboids emerge from the wall, claiming yet more lives. But then, amazingly, the dog reappears: he managed to save himself by crawling underneath the edge of the platform.