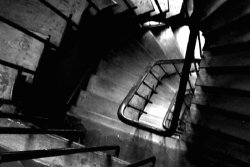 In a long, labyrinthine corridor a woman wanders, guided only by her sense of confinement. Within the boundaries of this uninhabited architecture she traces a confusing, circular itinerary. Spiralling around herself, she is forced to retreat inside in order to see a way out.

Born in 1970, Frank Richard studied film and television in Paris. Brought up on rock music, thriller novels and alternative cinema, he wrote several screenplays and worked as an actor. He made his filmmaking debut in 2000 while continuing to write articles on visual artists and photographers. Since 2002, he has collaborated on filmic objects, blending cinema and choreography, with young french and foreign choreographer. Today, Frank Richard always lives and works in Paris, he is writing screenplays for cinema.

Director Frank Richard will be available for Q&A after the screening.