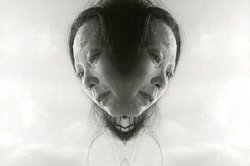 By subjecting fragments from the Akira Kurosawa's film Rashomon to a mirror effect, Provost creates a hallucinatory scene of a woman's reverse chrysalis into an imploding butterfly. This physical audiovisual experience produces skewed reflections upon Love, its lyrical monstrosities, and a wounded act of disappearance.

The work of Nicolas Provost walks the fine line between dualities, balancing fiction and fine arts, the grotesque and the moving, the beautiful and the cruel. His phantasmagorias provoke both recognition and alienation and succeed in pulling audience expectations into an unraveling game of mystery and abstraction. In some videos, filmic memory is stimulated through the use of short fragments from classic films by Akira Kurosawa, Ingmar Bergman, Alain Resnais or Russ Meyers, but Provost is as likely to utilize obscure B-films, contemporary cinema or thematic platitudes. Time and form are manipulated, cinematographic and narrative language is analyzed, accents are shifted and new stories are told. The extraordinary is elucidated in order to reveal the global. In addition to the use of film and visual language, sound is a constant factor in Provost's body of work, as a rhythmical spine or an emotional guideline.

My field of interest is to analyze and question the phenomenon of cinema, its various elements, its influence and conventional rules. My work is a reflection on the grammar of cinema and the relation between visual art and the cinematic experience. That said, it's all about love.