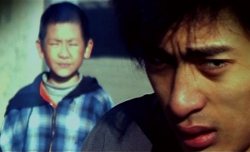 A stray dumb child met a thief in an escaping event. He got curious and tailed the thief, then got beaten up as cahoots while he was together with the thief .The thief returned to rescue out of guiltiness and was badly injured. The child tried various ways to call for help but nobody understands his message, as he is dumb. In the end he kidnapped a doctor with a knife out of his wits. Unfortunately, the police stopped him just right before he reached the destination. At this moment an ambulance spurred on in a distance, it looked like there is a sight of hope and yet so hopeless.