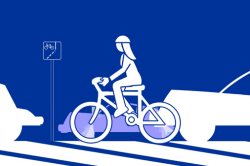 Not There Yet, the title taken from Irish Rail's inspired advertising campaign, is a journey into Irish transport, one of the finest examples of transport mayhem ever seen.

Jason Tammemagi is Creative Director with Monster Animation and Design having joined the company after he left Animation College in 1997. Starting as an animator, he soon found his niche in directing and working as a creative leader with the organization. Jason directs commercials and has shot films in a number of different mediums of animation. He is currently directing the new TV series "MANAGING THE UNIVERSE".