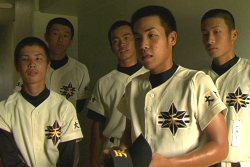 Taking Western viewers inside a never-before-seen world, the film follows two of the 4,000 high school baseball teams in Japan striving to make it to the National Championships at Koshien Stadium. Much more just than a game, this martial arts baseball has a deeper purpose: the forging of the spirit.

Kenneth Eng obtained his film degree from the School of Visual Arts in NYC. He has directed/edited several documentaries and short films, including the Projectile Arts feature doc "Take Me to the River". Eng directs and edits music videos, electronic press kits and short-subject documentaries through the TriBeCa production company he co-founded, Python Aquarius Productions.

Director Kenneth Eng, Writer / Producer Alex Shear, and Producer Takayo Nagasawa will be available for Q&A after the screening.