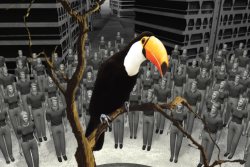 ALL PEOPLE IS PLASTIC

In the history of cinema the modern big city has often served as a screen onto which dystopian fantasies are projected: The idea of the urban space as a cruel, Moloch-like machine drove Fritz Lang's sinister vision of the future, "Metropolis" (1927), in which the mass of slave-like workers is forced into the serfdom of assembly-line labor. Harald Hund's 3-D animation film "All People Is Plastic" refers to both this image of the city as a machine of discipline and Jacques Tati's criticism of the modern age, for whom "corporate culture" serves as a working world of enforced conformity. In the world of "All People Is Plastic" the figures have long been the result of mass production: Hund animated his figures with conventional 3D character-animation software, so-called Default People (standard figures), and fit his matte-gray prototypes, schematized as either male or female, into the slots of a futuristic office world.

Director Harald Hund will be available for Q&A after the screening.