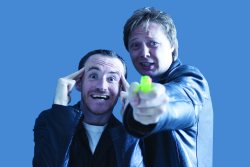 Bob and Ellis are screenwriters with integrity, talent and the willingness to do absolutely anything to sell their movie. Over four frustrating meetings with film executives, they desperately rethink their pitch, ready to go to any lengths to make that elusive sale. But how far is too far?

After earning writing credits on UK TV, J Blakeson sold "Goody Two Shoes" - a fast-paced teen feature script - to Mission Pictures. The film is currently being cast and J is attached to direct. Also in development is "Unreality Inc", an action thriller written with James McCarthy for Working Title. J is currently developing a sci-fi TV series with Portman Films and has just finished his latest spec script "Twenty-One", a comedy set in New York.