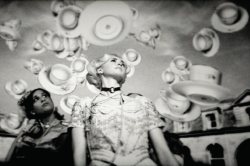 This anachronistic video features a stunning blend of live action and VFX work and is based around madness in the sky as a result of a conductor leading a frenzy of Tiger Moth planes and Zeppelins. Add the Victorian stately home, its tea party guests, a butler and a proud conductor being over run by the Tiger Moths and you have some pretty stunning shots. Choreographed to the track, the planes pass through vast skyline shots of central London, eventually grouping in abundance with their Zeppelin cousins to fill the skies with a swarm-like transcendence.

Reuben Sutherland, is originally from Featherstown, New Zealand and now living in London. He's is 32 years old and has shot, edited and animated amazing projects by himself. He went to design school to study illustration and ended up majoring in Photography. He then went into animation working as an animator and director. He has produced stunning looking music videos is for Phoenix Foundation for Festival Mushroom records where he directed, edited and animated the whole thing by himself in a month and a half! His work is already creating a bit of a storm in the UK and getting a lot of attention from the US. He has just completed part 1 of an international campaign for BBH and the fabulous new video for Doves for EMI records.