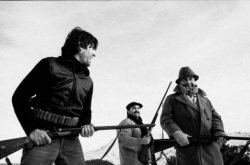 FOOTPRINTS IN THE SNOW

The song of a story-teller will plunge us into a sciencie fiction tale: "The Legend of the Starmonster". A tale about the loss of innocence and human condition, the source of many different characters linked through the same action, and wrapped in a world as real as symbolic, as cruel as magic

Pedro Touceda (1958) is a journalist, script writer and short film director. From 1980 to 2006 he has worked as a journalist for Radio 3, "Abc" newspaper and "Blanco y Negro" magazine. While working for "Blanco y Negro" Touceda created "PIMPANPUNK", a famous section featuring stars such as David Bowie, Lou Reed, Eric Clapton, and Rolling Stones among others. Pedro also published several books of short tales. His first short film, "El Descampado" (The Clearing, 2003) won several awards and honours in numerous international festivals.

Director Pedro Touceda and Producer César Romero will be available for Q&A after the screening.