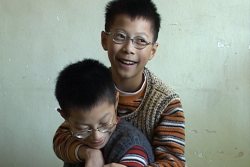 WALKING BY MY SIDE - PARENTS' HEARTS

Choi Ma is a single mother of a pair of twin boys (Ah Choi and Ah Shing). She is a China mainlander married to a Hong Kong man. In 1998 , when the twins were 3 years old, she relocated with the twins to Hong Kong with the intention of reuniting with her husband. After a medical check up in Hong Kong, the twins were diagnosed as spastic. Choi Ma was devastated; but the worst was yet to come. Her husband abandoned them. The film told the story of Choi Ma; her devotion to the twins and how she coped with the situation. The caring of one spastic child surely is not an easy task. Taking cae of two spastic children while at the same time adjusting to life in a new society, Choi Ma took up her responsibilities with courage and love. This is a story of a brave woman with a very simple wish of having her twins walking by her side.

Winnie HO has worked in TV for around 20 years. She began as an assistant director for TV dramas, later on she took up the role as director of TV dramas. It is in the past few years that she has begun producing documentaries.