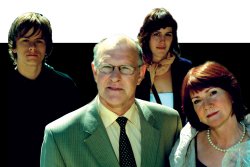 Filmed in Reykjavik and New York City, "Family Reunion" focuses on the themes of sexuality, secrets, love and family. New York lesbian Katrín is returning to her native Iceland for her grandfather's 70th birthday. At the reunion, her family in Reykjavik unwittingly engages her in discussions about marriage, children and her future - while she sneaks in phone calls to her girlfriend in New York. As she struggles with coming out, events reveal that other family members have secrets of their own. Family Reunion was nominated for the Icelandic Academy Awards.

Born and raised in Reykjavik, Iceland, Isold Uggadottir came to New York City in 2001 to pursue a Masters degree in Interactive Telecommunications at NYU's Tisch School of the Arts. From NYU, her fascination with visual media lead her to the Emmy Award-winning Partisan Pictures where she now edits documentary films. "Family Reunion" is Isold's directorial debut.

Director Isold Uggadottir and producer Stephanie Perdomo will be available for Q&A after the screening.