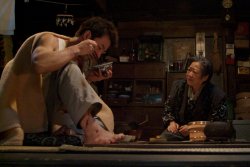 An elderly couple live in a mountain village in Japan in the years after World War II. One night a young man comes to their home seeking shelter from the rain. The woman is delighted; due to her dementia, she believes that their son Hajime has returned from the war. Her husband, however, knows that their visitor is dangerous.

Kenshin Nawa is a Japanese filmmaker who works as a director for commercial and film productions in Tokyo. Nawa received his MFA degree in Film from Columbia College, Chicago.

Director Kenshin Nawa and Cinematographer Hiroo Takaoka will be available for Q&A after the screening.