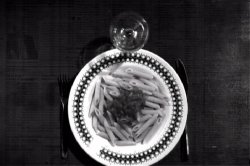 "The Crystal Ship" represents a day in the life of a man who is about to die, told by the objects he uses. In the background, the apocalypse of the world in the terrorism era, the stock market quotes, the television guides. The crystal ship is our society.

Marco Magni was born in 1978 near Milan. After high school, he attended the University of Bologna, where he studied Cinema. In this time he started making short experimental video. He graduated in the Discipline Of Arts, Music And Show, with a major in the History of North American Cinema, and proposing a thesis on horror film. In 2004 he shot "Merry Xmas, Motherfucker!," his first fiction short, now distributed by Troma Entertainment. In 2006 his first editorial publication was released, titled "Horror Made in USA." Magni now lives in San Francisco, where he is working towards a Masters in Directing.