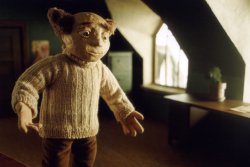 Animal is the story of a single father who is turning into a werewolf, his son who has mixed his body with a lamb in an accident, and the doctor who is the subject of the father's desire.

Tatu Graduated from the Turku Arts Academy. He has drawn animation, and made several animated films (Puppet, 3D, Flash) which have been shown at many international festivals. Since 2002, he has been teaching animation.

Director Tatu Pohjavirta and Producer Jyrki Kaipainen will be available for Q&A after the screening.