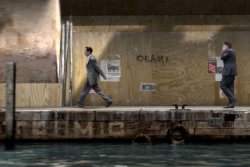 A man, and later a woman are walking through public space with the phones to their ear. They are carrying a bag containing an electronic counting device. It looks like they're involved in a very serious matter, but then something happens that seems to neutralize the importance of their actions. The question is: will they notice it? Public Spaces is an animated 'one shot movie' of exactly 10 minutes, dealing with the situation in our public spaces, where the dominance of telephony and the vague threat of terrorist assaults have changed the way we behave slowly, but distinctively.

Martijn Veldhoen (Amsterdam,1962) studied painting at the Rietveld Academy in Amsterdam from 1979 until 1984. From the start of his career, Veldhoen has been involved in many multidisciplinary projects that incorporated various disciplines such as music, sculptural objects, and later on, video and film. In 1992 Veldhoen started making video installtions, and exhibited in 1994 at the Montevideo/Rene Coelho Gallery (Amsterdam, The Netherlands) and in 1995 at the DotCom gallery during the Soho Arts Festival in (New York, USA). His video installation 'Dislocations' (1998) was exhibited in France (Marseille and Hirouville) and Germany (Dortmund and Berlin), and was nominated for the international media art price of ZDF/Arte and the ZKM (Zentrum fur Kunst und Medientechnologie, Karlsruhe, Germany). In recent years, Veldhoen started working on projects that can both be interpreted as video installations as well as experimental short films. These projects have been shown worldwide on exhibitions, film festivals and video festivals. 'Momentum' (2003) was nominated for a 'Golden Calf' for best short film at the Dutch Film Festival Utrecht, and has won the first prize at the exhibition 'Crysalis' in Bari, Italy. His second short film 'Forward' (2004) has won the Grand Prix at the Split Film Festival (Croatia). 'Public Spaces' (2006) is Veldhoens last short film.