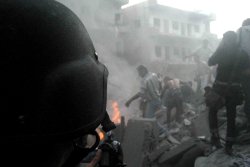 Beirut, July 2006. The Israeli bombings strike the city. While Beirut is still on fire, the filmmaker starts a journey across his natal land. The film is not a documentary - although the images are burning real - but an essay. Using two complementary techniques, the 16 mm film and HDV, the artist questions the deep foundations of documentary genre. The eye of the cameras goes through a country in a state of terror, it records the immediate effects of the war when it touches the civilians. Wael Noureddine films what we fear to face, and that has become a sensational icon through international press: death in its crudest angle. We can almost touch the victims, feel the bombings when they seize. But the artist also questions silence itself, the daily lives of the Lebanese, hiding behind their curtains. News images, curtains, shutters, darkness: everything hides life itself. In a poignant and harsh way, the artist shows another trip that unveils what lies under these screens: how can one face a war that won't tell its name? The trip starts for these young people with various drugs, before they roam between the ruins of their city. "Is there anybody there?" asks a man, as he lifts up the debris of their daily life. More than an escape, the trip would be here like a cry for life.

Wael Noureddine (Lebanon, 1978) is a writer, a journalist and a poet. His films depict, in a literary and critical way, real situations. They try to grasp the remains, the physical and mental scars from the war in the Middle East, while resisting subjugation and resignation. His film "from Bayreuth with love" was selected in many festivals around the world. In July 2006, while the war was breaking out, he went to Beirut to shoot "July Trip".