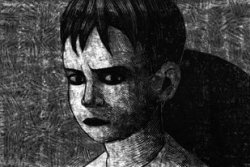 THE MEMORIES OF DOGS

My cheeks brush against the stones, I look out from a break in the wall.

Simone Massi (1970, Italy) after getting his degree in Animated Cinema from the State Institute of Fine Arts of Urbino, he spent a period of work experience with the Bozzetto Studio. In 1996 he began working as a free-lance animator for different production studios cooperating in producing CD-ROMs, videos and TV series and movies. "The memories of dogs" is his 17th film.