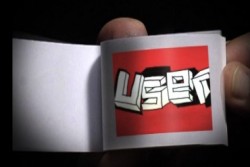 Fingers control a flip book that reveals a series of pictures. With each flashing image, spectator access is denied. People, signals of the digital age, and constructions of civilization are edited together to form a rapid firing of information. The film is reminiscent of media images injected into everyday onlookers. Short thrills are exemplified, making the flip book a series of 'cinematic attractions' -- a kind of peep show for viewers.

Edouard Salier has created over the past ten years a wide range of graphic works, including short films, promos, tv idents and installations. In 2005, his short films Empire and Flesh started touring around the world (Venice, Sundance, Paris, London, New York, Toronto, Séoul), and winning several awards in festivals. His new film 4 premiered in Clermont-Ferrand 2009 and has already been selected in more than 20 festivals. Edouard Salier is now preparing his first feature film.