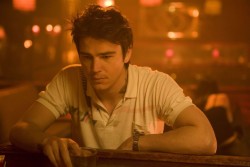 AUGUST follows Tom Sterling (Josh Hartnett) as an aggressive, young dot-com entrepreneur who fights to keep his start-up company afloat. Tom finds himself on a personal and professional downward spiral as he struggles to reunite with girlfriend, Sarrah (Naomie Harris), regain control of his company from his apathetic investor Ogilvie (David Bowie), and deal with age-old family wounds with his father, David (Rip Torn) and his brother Joshua (Adam Scott). The film also stars Emmanuelle Chriqui as Morela and Andre Royo as Dylan.

Writer/director Austin Chick comes from a background in painting. He studied filmmaking at Purchase College, graduating in 1998. Chick's first feature, "XX/XY," premiered at the 2002 Sundance Film Festival. He has since worked as a producer on Sidney Lumet's "Before the Devil Knows You're Dead." His projects in the works include "Love Is Easy," a bittersweet dramatic comedy; a revenge thriller titled "Grrls Against Boys;" and a dark psychological thriller set in the Hamptons.