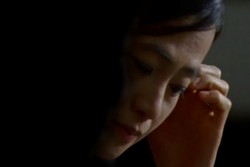 In a hotel, Sydney - an american tourist on vacation in France - awakes in the morning and finds out his wife has left him. From his lonely room, he seems to set new hopes in a mysterious chinese woman living in the next room with her husband and apparently in need for help. Sydney will try to go beyond the wall that separates them, searching for the right word or gesture that will make him reach her.

Benjamin de Lajarte was born in 1971 in Caen, France, where he spent his childhood and adolescence. While following a classical schooling, at the same time he took on musical studies. In 1995 Benjamin went to Taiwan for a short travel study that would eventually last over a year. A short time after his return, he signed on as a comedian in a theater company in Caen - called the Black Butterfly Theater. He studied there for a whole year before going to Paris in 1997 in order to deepen his study of the actor's technique with Jack Garfein (founder of the Actors Studio in Los Angeles in 1966) and also with the International Theater Workshop of Blanche Salan and Paul Weaver. In 1999 de Lajarte directed and performed in his first short film : "Open skies". This short film received five awards, two of which for best performance. In 2002 he definitely moved to Paris, became the co-founder of the production company Qualia Films and produced three pictures. Benjamin is pursuing his career as an actor for motion-pictures, television and the stage theater. His first feature film, entitled " The games of clouds and rain" has received the First Script Trophy by the National Center for Cinema in 2005 and is currently in production with Qualia Films. "Her Name" is his second short movie.