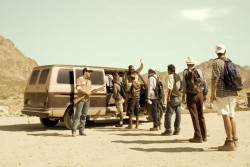 After their friend is deported to Mexico, two young Americans decide to smuggle him back across the border, a single event that quickly escalates into a lucrative, full-time business venture that becomes more complicated than they ever realized possible. Corruption and greed lead the men down a path of brutal destruction and despair. Figuring they can make a couple thousands dollars by sneaking Mexicans into America, Steve and J begin a lucrative operation as suburban smugglers, offering immigrant-hopefuls three beneficial "travel packages" that guarantee to help refugees get into the United States, live with forgotten family members, and find a decent job. They navigate their way through the lavish lives of suburban human smugglers with unexpected humor and stylish cinematography.

Born and raised in the Bay Area of northern California, Brian Petersen graduated from the film program of BYU in 2000. Petersen went onto work as an Assistant Director for the indie-hit Napoleon Dynamite, a film in which he also has a small acting role. After the success of Napoleon Dynamite, Petersen went on to write and direct his first feature film, Think Tank. Now living in Los Angeles, Petersen recently started up Side Street Productions, a small indie production company with long-time friend Brett Spackman. In addition to directing, Brian has also had roles in various commercials and the MTV Show Sportsblender.