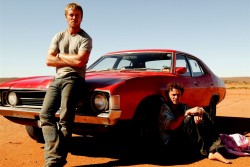 To gain some much needed cash John Kelly accepts a job to kidnap and deliver professional gambler Eli Jones to his keepers in the Australian outback: No questions asked. The kidnapping is meticulously planned, but the road John chooses takes him on a dark journey where every choice has tragic consequences.

Jasmine Yuen-Carrucan embarked on her career in the film industry, starting as a camera assistant on the break-out Australian film Shine by director Scott Hicks. From there she worked on notable Australian productions such as Thank God He Met Lizzie and with acclaimed directors such as Jane Campion on Holy Smoke, George Miller on Babe 2 and Phil Noyce on The Quiet American. She also worked on a variety of international productions including John Woo's Mission: Impossible II, Edward Zwick's The Last Samurai, Zhang Yimou's Hero, Quentin Tarantino's Kill Bill and Kill Bill 2 as well as Stephen Gagan's Syriana. This steady stream of work as a camera assistant enabled her to gain invaluable knowledge about the industry, sparking an appreciation for other parts of the film-making process. She expressed an interest in editing which was noted and encouraged first by Woo whilst working on Mission: Impossible II, then Tarantino with whom she worked as an editing PA on Kill Bill 2. Yuen-Carrucan initially set her sights on becoming a cinematographer. However, as the years passed and the film sets multiplied, she found herself more absorbed with the work of on-set directors. CACTUS is Jasmine's first film.