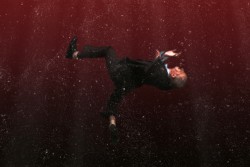 A short movie about losing ones Love and the survival that follows after. I sing, I drink, I laugh, I dance, while my heart weeps. The melancholy, imagination, and hope. My Love left me last night.

Douwe Dijkstra (1984) graduated from the Academy of Arts in Zwolle in the summer of 2005, winning several prizes for his graduation films. In 2006 he helped start Festina Lente, a creative Amsterdam based network/agency. Next to cooperating in several Festina Lente projects, including music videos and animated web-features, he works on independent films, multimedia installations, and exhibits his work in galleries and museums.