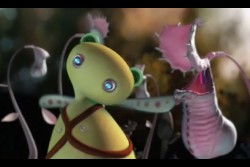 Mother's Day is a story of birth, love, betrayal, redemption, deception and rebirth. It is the adventure of a young insect making his way through an enticing but dangerous forest. Along the way he meets lovers, friends, and monsters. Some lessons need to be learned the hard way, and nature can be a cruel mistress.

David Lobser studied film and animation at the School of Visual Arts in New York (1996-2000). He works in the post production and animation industry in New York at companies including The Mill, Radical Media, Psyop, Framestore, and Curious Pictures, among others. He worked briefly in the film industry on The Matrix III, Lord of the Rings III, I-Robot, and King Kong. His short films tend to be surreal, with themes that juxtapose the cute and the scary. They have screened at festivals (Platform International Animation Festival, Anima Mundi, Seattle International Film Festival, International Film Festival Rotterdam, Los Angeles Film Festival, Annecy, etc.), television (PBS, Sci-Fi Channel, MTV), DVD collections (Stash, Creative Review, Shots), and print (On Air, AWN, PC Gamer). He mainly uses 3D software for his work, but treats it like a mixed-media tool, bringing in elements from the real world as much as possible.