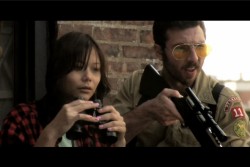 Set on a fire escape in Brooklyn at dawn, a boy and girl meet to perform a weekly ritual in their makeshift crow's nest. She's the spotter, he's the sniper and they're hunting alley rats. As they sip coffee in the chilly morning air and wait for activity in the alley below, they converse idly about urinals and Gouda. As the rats emerge, the hunt begins. She gives the calls and he pulls the trigger. All the while, the conversation escalates, revealing there's more at stake for both of them than the life or death of an alley rat.

Thomas Beug is an Irish director currently based in New York City. His directing work brings together a spontaneous, real-life sensibility with an eye for beautifully composed, cinematic visuals. His last short documentary, Hangar B, won 'Best Documentary' at the Fastnet Film Festival and received a 'Critic's Pick' at the DOC NYC Festival.

Director Thomas Beug will be available for Q&A after the screenings.