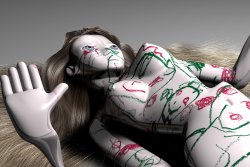 Casualties of Love is a depiction of the unintentional cruelty to human replicas by children. It is inspired by the intense and uncontrolled love that children have for their favorite toys.

I have always wanted to tell stories that could be read by anybody. In order to make my stories universally legible I choose themes and protagonists that are stereotypical and utilize a concise visual language with a deep emotional undertone. My art explores and reinterprets Jungian archetypes in the modern world. In addition I search for neo-archetypes in mass media and global popular culture. An important neo-archetype is the Bambi character which to me has a seductive and an innocent side. This duality is a prominent theme in my work. Compulsion for total control and perfection has made the computer my medium of choice. At the same time, the technology I use is new and rapidly advancing, allowing me to experiment with new aesthetics as of yet unexplored. This gives me the freedom to create my own aesthetics within the medium.

Director Faiyaz Jafri will be available for Q&A after the screening, and notes that "The superimposed artwork on the doll in the animation come from original drawings from my children, Sky and Vega."