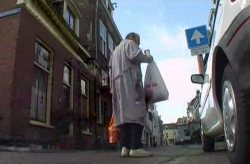 a street, a woman and a man... A young woman has to pass a homeless man in her street. She doubts if she will give the man some money; Will he buy alcohol or drugs from her money?... Or can he afford a meal and a bed for tonight? After we have seen different options in her mind, she decides to give him some money after all. But things take a different turn.

Mathijs Geijskes got his degree in drama and film studies at the University of Utrecht. He works as a free-lance scriptwriter, producer and director. He also gives workshops in short film production. His shorts has been awarded more as 25 prizes at numerous film festival all over the world. In 2008 he made the first 3D live action short film in the Netherlands. His production company A Million Dreams now specializes in 3D film making. Nevertheless Mathijs still makes 2D films as well.