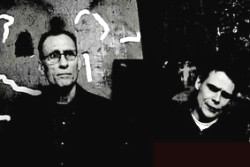 TIME IS BUT BRIEF

The film "Time Is But Brief" (Liden Tid), using an often surprising manic and fractured style, is exploring the visionary possibilities of systematic disorientation of the viewer's senses. Yet, the filmmaker skillfully manages to take the audience through a gut wrenching, nightmarishly absurd tale of a young man, whose life has gotten out of control. The contradiction of relentless desire vs. ultimate destruction taking over the main character's life is summed up in scenes, where a strangely detached American philosopher is spewing dead-on truths about life and death. With a reckless, somewhat sinister distance and dark humor, the director (Anders Bramsen) gives us an unposed picture of a soul, yearning for freedom, and raises the question of what's left when humans are incapable of, or unwilling to live life on life's terms.

Anders Bramsen (Copenhagen, 1974) lives and works in New York City. Anders attended various art and film schools. Since 1996 he has created a number of experimental films and dramatic shorts. Bramsen's work emerges from situations where personal isolation, inner lives and surreal fantasies rules. Often his themes are based on observations of life's conflicts and pains, dreams and adventures, poetry, violence and aggressive rawness.

Director Anders Bramsen will be availabe for Q&A after the screening.