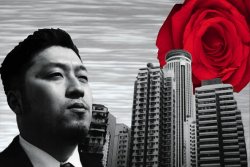 A solitary man struggles to grow a rose in a surreal urban world. Lonely and dislocated, he drifts in and out of a dream state envisioning the promise of regeneration. ROSEWATER tells a story of hope sustained through obsession, ritual and, ultimately, sensuality.