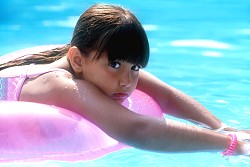 SUMMER OF THE SERPENT

Eight-year old Juliette sits at the side of the local pool waiting for another lonely summer day to pass when an unexpected newcomer arrives. Fascinated by the stranger, Juliette embarks on a surreal adventure of discovery. SUMMER OF THE SERPENT explores the unlikely bond that develops between two people from different worlds. Tender and provocative, this visually driven story raises questions about difference and desire.

The director will be available for Q&A after the screening. Lead actor Keiichi Kondoh, co-producer Richard Beenen and associate producer Georgiana Pickett will also be in attendance.