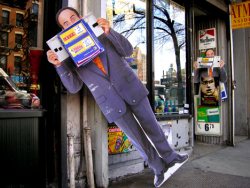 E=nyc2 captures the dynamic energy and movement of New York City. Structured in a series of observational vignettes, this piece features New Yorkers moving through self-contained, yet interconnected, worlds as they pursue their lives and dreams.

Director Kimi Takesue will be available for Q&A after the screening.