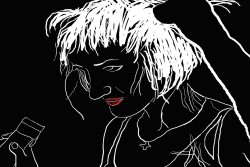 A LETTER TO COLLEEN

Head smack into the purgatory of modern teenage life. Using fittingly raw and economical animation, this film is a harsh and wrenching plea to make sense of the past, and to find absolution for having lived too much, too young, and too fast.

Animators Marina Tsaplina and Bryan Brinkman will be available for Q&A after the screenings.